Towing a teardrop trailer in the snow

There will probably come a point in your teardropping life when you have to tow in snowy conditions. We have towed the Sunflower in several blizzards and on icy and snow covered roads (she has a good set of tires) without any issues by following these few tips — tips you will be familiar with if you live in colder climates. 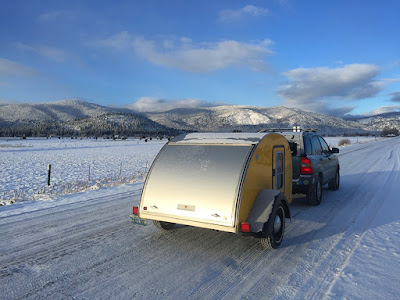 1. Slow down. This is a no-brainer. You and your vehicle (and the trailer) will be more responsive to traffic, accidents, ice and slick roads when you are driving 10-15 miles below the speed limit. Another tip is to avoid changing lanes. Stick to the slow lane.

2. Don't brake; downshift. Braking hard on slick roads can cause your car to skid. Instead, when you are coming to a stop, slow down and downshift to a lower gear and then brake lightly.

3. Take the backroads. While some secondary or backroads might not be plowed, they are also less congested. You will have the freedom to drive the speed you need to and less vehicles to deal with. In fact, some secondary roads are owned by counties rather than cities and actually get plowed first or more often.

5. Park it until conditions improve. If the conditions are just too dangerous, pull over and get a hotel room (or camp) for the night. You might even need to unhitch the trailer and leave it somewhere until you can come back and retrieve it during calmer weather.