Living in a Teardrop Full Time

My teardrop friend Guy Mazzeo lives full time out of his homemade teardrop trailer with his Cavalier King Charles Spaniel/Mini Poodle mix dog. Her name is Butch. For years, Guy traveled around the country working with veterans and helping them to receive their VA benefits. During that time he lived out of his car, but after suffering from congestive heart failure and brain tumors, he realized he needed a little more comfort. 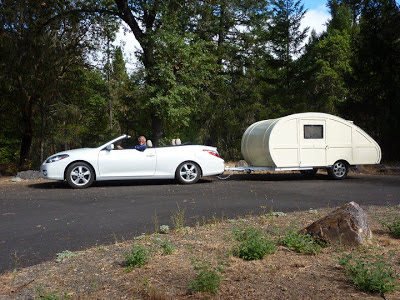 Guy had always been aware of and interested in teardrop trailers, so he decided to design and build his own. Over the course of a year-and-a-half, he built a 12 foot long and 6.5 foot wide wooden teardrop trailer with a kitchen in the back. The interior includes a bed for him and Butch which is raised up on drawers made from milk cartons, a 4x2 table that holds his laptop, a toilet and a closet.

"I might be the only teardropper around who travels around with one or two suits," Guy laughed.

His teardrop also has solar power which runs his 12 volt Dometic refrigerator, some lights and his catalytic heater. The teardrop is very well insulated, and he mentioned that he never even needed air conditioning while traveling in Florida. He uses a Coleman on-demand water heater for hot water and some of his showers.

Guy travels with the weather. In the summer, he camps out at Applegate Lake on the border of Oregon and California and in the winter he heads down to Southern California and Arizona. During his travels, he's learned a few things he had always wanted to do; fishing was one.

"When I was a kid growing up in Brooklyn, I fished," he said. "As an adult, I really wanted to learn it again and now I can. In fact, I just went perch fishing in the surf here in Malibu."

Guy feels his way of life is ideal. With his grown children in jobs or grad school, he has the freedom to roam around the country and see new things and meet new people.

"It's better than sitting on my butt somewhere," he said. He also mentioned that he decided to build a teardrop rather than purchase a conventional RV because a teardrop is the greatest icebreaker in the world.

"When you are in a campground with a teardrop, you can't be anonymous," Guy said. "Right now I'm in a fancy RV park in Malibu with an ocean view and a good half of the park's residents have come over to see me. Many of them have mentioned to me that they once had a teardrop, but over the years have upgraded to something like a Prevost." 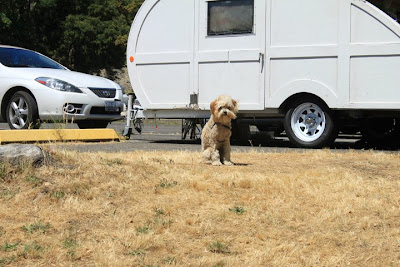 Most peoples' reactions to him living full time in a teardrop are positive — especially from fellow campers or young people who are envious of his lifestyle. Other full-time RVers also totally understand the lifestyle.

"However, there are the people who are retired, but are afraid of giving up everything they have," Guy added. "They ask me what I do about doctors and medical issues. Who cares about that stuff? I have primary care physicians in different states and I get veteran's care. My doctors think it's fine to live like I do, but my cardiologist thinks I'm nuts."

Guy does admit that his lifestyle is not for everyone and that some couples may find it to be a challenge. He did mention that he also worries sometimes about safety. During one trip he was limping and did want to be looked upon as prey by any criminals, so he dyed his white hair blond so he would look younger. He admits that there is a loneliness factor, but credits his frequent trips to teardrop gatherings as the best way to keep in touch with his friends.

"If I'm feeling lonely, I just go out for dinner," he said.

Guy is looking forward to spending the holidays down in Malibu, and then heading down to the Arizona desert for a few months to enjoy some mild weather. The sunsets are not too bad either. 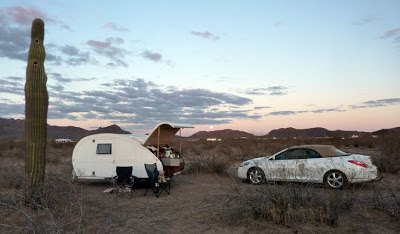 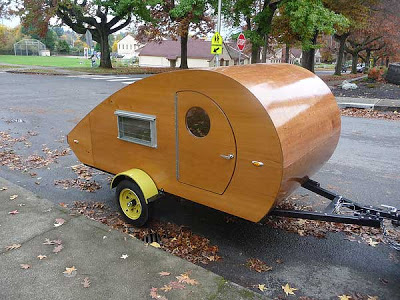 On this blog, I am going to regularly feature teardrop designers, builders and manufacturers.

I first saw the Zyl Teardrop on the Tiny House Blog and really loved the style and craftsmanship of this hand built camper. The Zyl Teardrop was designed and built by vardo maker, Abel Zyl, and he will make you a custom teardrop for around $6,400 over the course of a month. The Zyl teardrop is only 625 lbs. and is built with wood with an epoxy and varnish exterior and stainless steel hardware. It is 6x9 feet and has a queen size bed inside as well as LED lighting. The galley has a kitchen with a sink and a carryable greywater tank.

Keep an eye on his website for additional photos 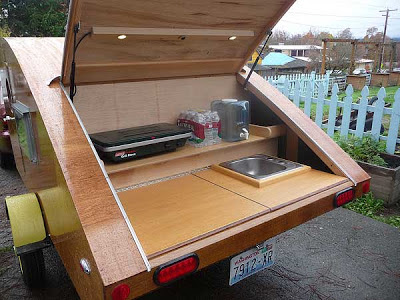 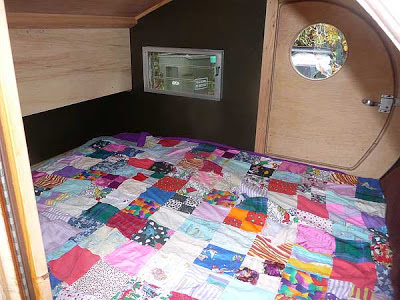 The Pros and Cons of a Teardrop Trailer

When fellow campers approach me and my teardrop camper, many of them will ask why I chose to get a teardrop rather than a "regular RV." One of the main reasons I chose a teardrop was for its ability to be towed behind nearly any kind of car. I didn't want to have to get a large truck or SUV just to go camping. Also, I was drawn to the cuteness factor of the teardrop. 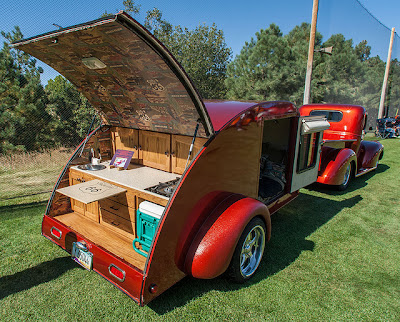 So I got to thinking about the other pros and cons of owning a teardrop. After talking with a few other teardroppers, these seem to be the pros and cons that pop up the most:

When you drive into a campground, everyone looks at you (this can also be a con)
I get a lot of smiles when I pass people on the road
Since teardrops are so small, you get to spend most of your time outside
Your bed is always made
You can cook and eat outside
You can hook them up with very little effort or strength
Teardrop gatherings and other teardroppers

During rain or wind storms, cooking is no fun
It's difficult to get dressed in the bed area
You always get approached by someone when you've just woken up
Lack of space for clothes
Hauling bags of ice into the ice chest
Most teardrop camping has to be done in warmer weather or climates

Unfortunately, I live in an area where we really can't go camping all year long. So in the winter months I cover up the teardrop, take the battery out and put it on a trickle charger. If you leave the battery in a teardrop trailer all winter long without using it, the power will drain and it won't hold a charge...putting you about $250 into the hole for a new battery.


So I take out the battery and hook it up to an inexpensive trickle charger I bought at an RV store. The charger is called the Battery Tender and runs off a regular power strip. When connecting your battery to the charger, be sure to connect the positive and negative connections first and then plug the charger in. It will take a few days for the battery to charge up (depending on the size and how much of a charge it needs) and then you can unplug it. Plug it in a few more times over the course of the winter to maintain your battery's charge.

What do you carry in your teardrop?

Teardrops are great, little trailers where you can carry everything that you need in a small space. However, it's best not to carry too much or you will find yourself constantly reorganizing or re-arranging your tiny trailer. Teardrops are also great because you are always packed up. We don't spend too much time packing or unpacking the teardrop trailer when we go on a camping trip. It takes us about 15-30 minutes to grab everything we need before we hit the road. 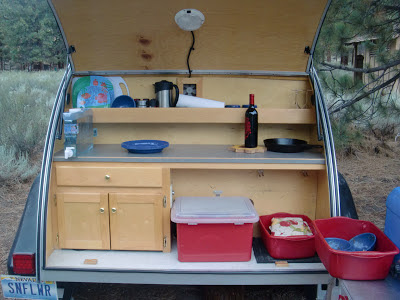 When we are out camping, people will ask me what I carry around in my teardrop. Here's a comprehensive list of what I usually keep in my teardrop all the time:

In the storage area under the bed:

Clothes (my husband and I keep a small supply of clothes in the teardrop):

In the galley (kitchen):

On the front grill:

Ice chest with food, and most importantly, beer

What we carry in the car:

Camping in the Sunflower

We have camped in a multitude of places with the Sunflower. Some of our favorite spots have been in Oregon, California, Nevada and Utah. The Eastern Sierras, the Nevada desert, Death Valley, Lake Tahoe, the California Coast, southern Utah and Crater Lake have ranked as having some of the best campgrounds around...and the spots fit a teardrop trailer perfectly.

The Many Shades of Teardrop Trailers

Teardrop trailers come in all shapes, sizes and colors. One of the most fun things about owning a teardrop is that it's fairly easy to make it reflect your own personality or sense of style. Most teardrop trailer owners will design, paint or decorate their teardrops to follow a certain theme. I've seen hippie teardrops, 50s style teardrops, Route 66 teardrops, celestial teardrops and even a teardrop built to look like a pirate ship. Here are a few of my favorites shot from various gatherings and events: 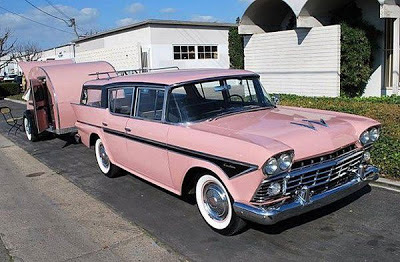 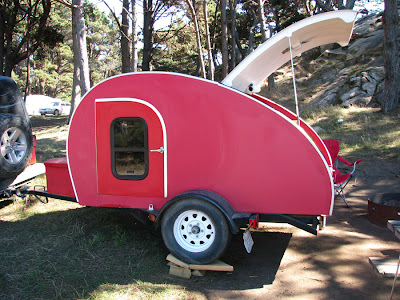 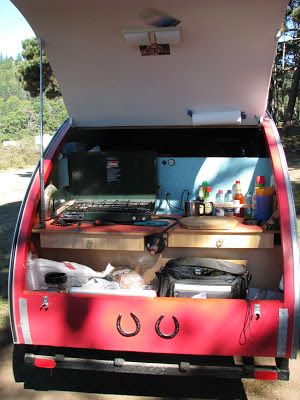 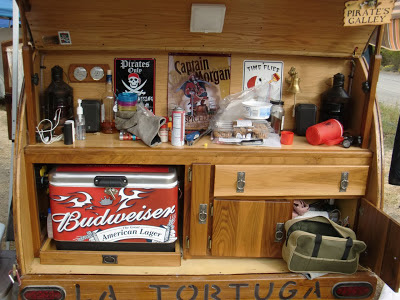 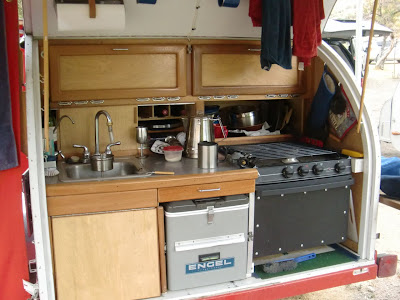 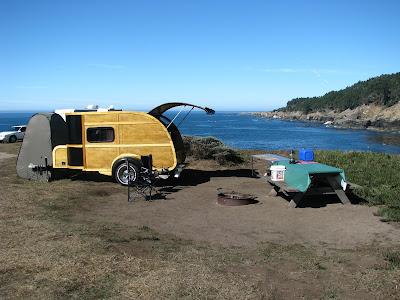 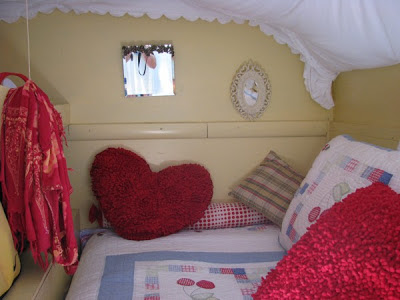 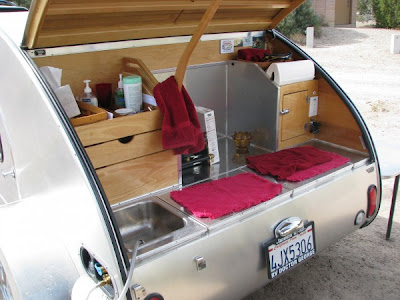 Introducing the Sunflower and a Little Teardrop History

I own a 5x8 foot bright yellow Pleasant Valley Spirit teardrop trailer named the Sunflower. It attracts so much attention that I thought I would finally put up a blog about my trailer as well as additional information on teardrops. Teardrop trailers are small (under 10 feet long) camping trailers and usually only contain a bed in the main compartment and a kitchen, or galley, in the back hatch. The main characteristic of a teardrop trailer is that you can't stand up in them. Teardrop owners refer to a taller trailer as a "standy". 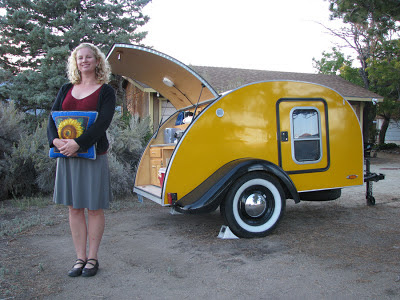 Most teardrop trailers that you might see are built by hand by various builders. Some are owner built, while some are custom built for a specific customer. Many teardrops on the road today are manufactured by the Little Guy company, who also uses Pleasant Valley's building skills.

Teardrop trailers first became in the U.S. in the 1930s when magazines such as Mechanics Illustrated published plans. The first teardrops were designed around the idea of using standard 4 by 8-foot sheets of plywood with hardwood spars. Teardrop trailers remained popular until the mid 1960s, after which they disappeared from mainstream camping. However, in the late 1990s, plans became available on the internet and in recent years teardrop trailers have made a resurgence and are again growing in popularity. [From Wikipedia] 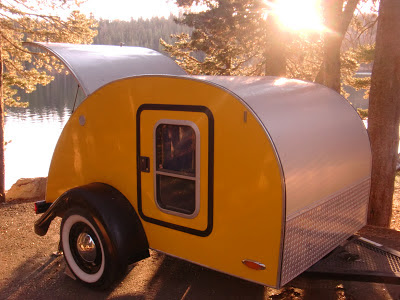 The Sunflower (most teardrops have a name) was manufactured by the Pleasant Valley Teardrops company in Sugarcreek, Ohio. It is Amish built and super tough for such a small trailer. Normally, a brand new teardrop trailer from Pleasant Valley can cost around $8,000 to $10,000. However, I was able to find my brand new trailer from a private dealer in Florida for $4,000. I paid a shipper from UShip (the Shipping Wars company) to tow it to my home in Nevada for $1,000. So for half the price, I was able to have my yellow beauty delivered right to my door. The Sunflower is towed by a 2008 Kia Sportage. 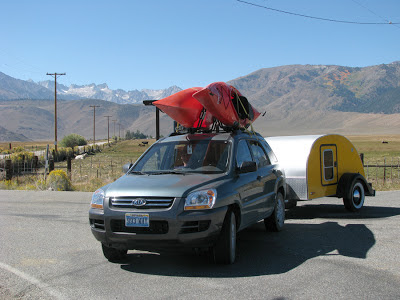 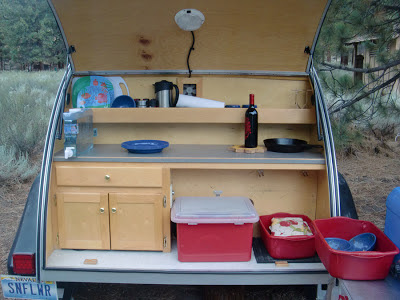 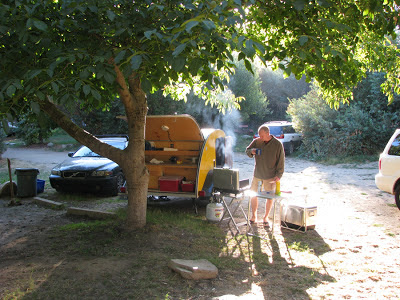