I met Stacie Tamaki, owner of the Bay Area The Flirty Blog, at the Treasure Island teardrop gathering and was seriously impressed with her new teardrop trailer. The Glampette, a self-contained and light (600 lb.) trailer was built by Fred "Alaska Teardrop" Markoff from the TNTTT online forum. Stacie recently returned to her home in California after picking up her new trailer from Fred's studio in Michigan, and had a lot of tales to tell of her nearly 5,000 mile round-trip to pick up her new baby with the yellow trim. 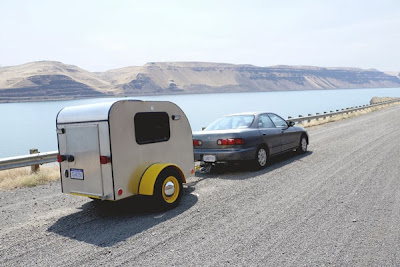 What impressed me the most about Stacie's trailer is the way she designed it to accommodate her safety requests since she travels alone, along with her dog, Kitai. Her teardrop enables her to stay inside to cook, use the bathroom and it even has a peephole in the door to check out her surroundings before opening it up. 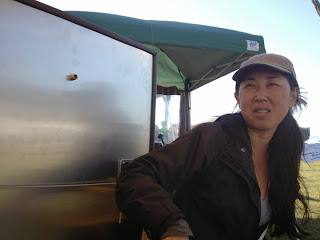 Why did you decide to get a camping trailer?

I saw "Audree", blogger "The Fancy Farmgirl's" vintage, glamped, 1959 Fireball canned ham in a 2011 blog post Tiffany had written and realized I wanted a glamped-out trailer of my own some day. I thought it would be fun to do overnight trips around Northern California but instead I've taken a three-week trip, followed by a two-week trip, followed by a four-week trip since June. 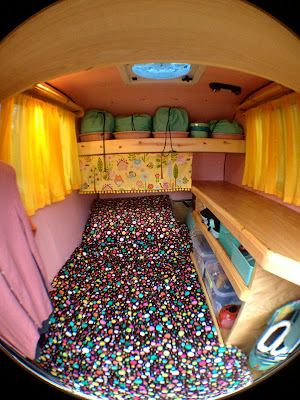 What led you to teardrop trailers?

I wanted to tow a trailer with my everyday car, a 1994 Acura Integra. It's a 4-cylinder rated to tow 1,000 lbs so I knew a traditional canned ham was out of the question as it would be too heavy. I started researching on Google looking for smaller alternatives and discovered teardrops in the process. 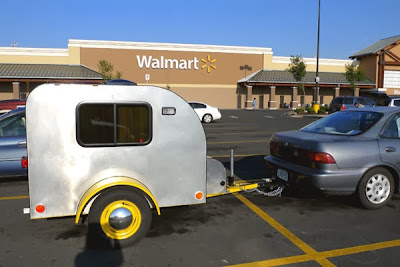 Tell us about the building and buying process.

When I realized I wasn't going to be able to find what I wanted already out there, I decided to try to build it. So, I designed the trailer, took a MIG welding and metal shop class and realized it would take me at least five years to build a sound, safe trailer. In the meantime, I'd met builder Fred Markoff on the Teardrops & Tiny Travel Trailers forum. He goes by the name "Alaska Teardrop." Fred builds his Alaska Teardrop and Northern Lite Traveler trailers the way I needed to build mine, with a welded steel frame instead of wood (wood is heavier). He, along with many other members, posted into my design idea thread and began advising me on design and construction methods. One thing led to another and by the time I realized I didn't want to do the build on my own, that I needed to hire a professional instead, Fred was in my sights as the perfect man for the job.

After convincing him to let me hire him we drew up a contract and he began work on The Glampette in December 2012. She was completed in May 2013. During the build process he emailed me photos of his progress every other week and we'd talk on the phone once a week about details. When she was done I drove (alone) from California to Michigan to pick her up. 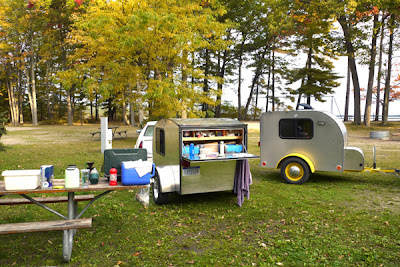 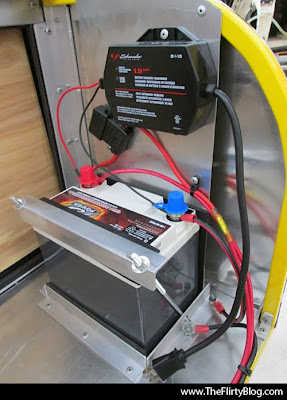 What features did you want in the trailer?

Because I'd always be traveling alone I wanted my galley and storage to be inside the cabin, not on the rear under a classic teardrop hatchback, so I'd feel safer not having to leave the trailer at night. I also needed it to have a dry weight of less than 600 lbs so that my car could safely tow it. I wanted more vertical interior height so I could sit upright inside with room to spare. I also wanted to be able to store and use a Thetford porta potty inside the trailer in case of late night emergencies when I might not feel it would be safe enough for me to wander an RV park or campground alone. Basically what began as a teardrop design became a mini canned ham profile instead. I call The Glampette a canned "SPAM" due to her more petite size and shape.

I keep my cooler in the car (usually filled with eggs, fruit, homemade (frozen) lentil soup) but all of my cookware and dry food goods are stored in the trailer on the bottom shelf of the interior galley. I also eat a lot of Subway when I'm "traveling" since they're often open at the 24 hour Pilot Travel Centers. 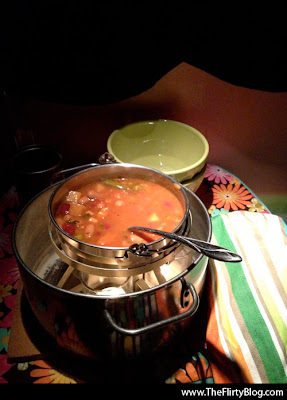 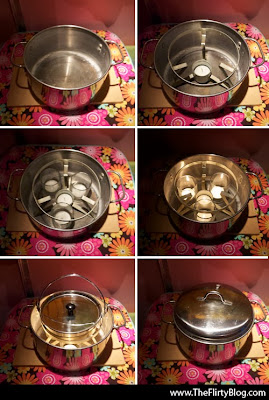 To be honest I began as a traveler, more than a camper. That entails driving from point A to point B, usually 10 to 11 hours each day along the interstates and stopping at dark to be safely off the road at an RV park. I've also stayed at Walmarts, numerous Pilot Travel Center truck stops, a winery, and a restaurant. Only recently I went camping in Wisconsin and along Michigan's Upper Peninsula (UP). I'd definitely recommend camping in the UP. Many of the state parks and national shorelines are right along Lake Superior and Lake Michigan so the views were stunning, especially in the fall with the leaves changing color along Highway 2 as you travel from park to park. 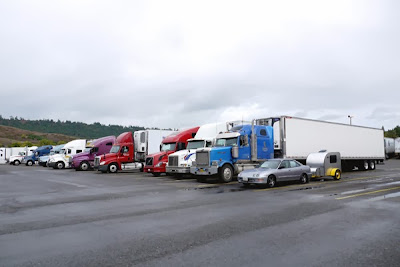 What advice do you have for women teardrop owners?

Don't let fear hold you back from hitting the road on your own. I got caught in a tornado and large hail storm in June (and had to be pulled out of 3 inches of hail by a wrecker), three sleet storms this fall, torrential rain, lightening and thunderstorms, 30+ mph winds in South Dakota, a 28º (F) night in Oregon, and many gorgeous days of blue skies and sun enjoying the landscape as I traversed I-80 and I-90 to and from California. I haven't regretted a moment of it.

I have two cell phones (an ATT & Verizon) for better cell coverage, an AAA membership that includes my trailer, a tool box, a tire patch kit, a portable tire compressor, an alarm on my car with a panic button I can activate from inside the trailer, and I use a as much common sense as possible to stay safe. I have several other safety layers but I don't disclose what they are publicly because the element of surprise would give me an advantage if I ever need to use one.

Always have a spare and know how to change your own tire. Even if you have AAA you may not always be within range of a cell tower to call for help.

Learn how to downshift going both up and downhill. This is especially helpful when traveling through passes on rainy days. Not needing to use the brakes to slow yourself adds an extra measure of safety that reduces the chances of sliding across wet pavement.

Also, learn to back up your own trailer. Find an empty parking lot and practice until you get it. Just take it slow (very slow) so you can see where you're going and make minute corrections. Once you figure it out it just gets easier and easier. 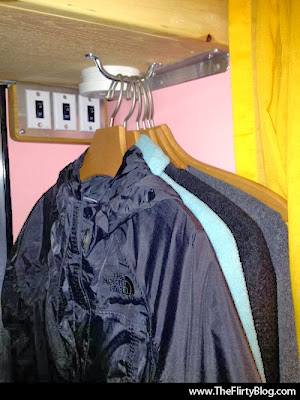 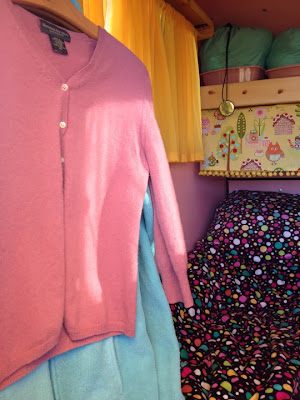 What do you like most and least about teardrop camping?

The thing I like the most is the self sufficiency aspect. I love that my trailer is like a tiny studio apartment. From the moment I got it I felt like I could get rid of everything at my house and just live (comfortably) from the trailer. The thing I like the least? That would have to be the mosquitos in the midwest. They're far more plentiful and aggressive than the California mosquitos I'm accustomed to. And for some reason they love me! I had swarms of them biting me on both of my trips back east until the first light frost hit Michigan in early October. 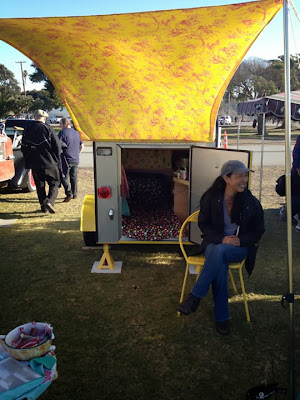 What are your favorite camping accessories?

Hmm...I love my awning. It's nice that it creates shade I can set my chair beneath but most of all I just love the way it looks. Theres's something so nostalgic and whimsical about the old rope and pole style. I also love the aqua grill I found on Etsy. It screams vintage style with its chippy paint and unique design. I set it outside my trailer to use as a fire-safe cooking platform for my ultralight propane back packing camp stove. It also doubles in the trailer as a shoe rack. I can put my wet, muddy, or dusty boots on it to keep my floor and blankets clean when I turn in at night. 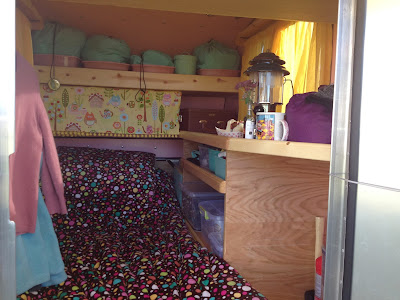 What has been the reaction from other teardrop owners and non-owners?

In general people can't get over the small size, or that I can fit inside of it to lie down. But once they sit inside they all say it's more spacious than they thought it would be. Those who have built or restored a trailer all compliment the quality of Fred's construction techniques. He did an outstanding job building me a sturdy, well insulated, well built, water resistant, light weight trailer. Equally, most are blown away that I travel alone. Both women and men have said they would be too afraid to. For some reason it doesn't phase me. I don't take any risky chances with my safety so it truly doesn't seem anymore dangerous than when I'm at home. I'll even check local crime maps online ahead of time to make sure I'm staying the night in a safe part of a city or town I'm unfamiliar with. Bad things can happen anywhere.

I want to experience life to its fullest potential. The Glampette has already taken me on more adventures than I could have hoped for, and I've only had her for five months! 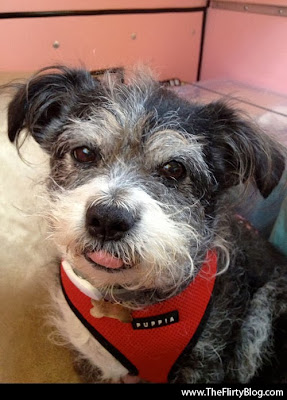